In search of the Winner of the 2018 everis Awards

The competition for the everis Awards is coming to an end. On December 3, 2018, the winning project will be revealed from over 1,000 entries in over twenty countries that fall under three categories: new business models in the digital economy, industrial and technologies, and biotechnology and health.

NaviLens: Freedom for Users with Hearing and Visual Impairments

Five years ago, the Neosistec team attended a conference organized by the National Organization of the Blind in Spain (ONCE). During the event, these professionals, who have been creating mobile, tablet, smart TV, and web applications for more than ten years, became aware of the difficulties that the visually impaired face in being able to move around freely. The Braille codes installed on bus shelters, for example, pose a serious problem: how to access them.

Committed to finding a solution to this problem, the team behind Navilen joined forces with the University of Alicante to develop a label that could be read with a mobile camera without needing to know its exact location. This is how Navilens was conceived. It is a mobile app that can read labels from up to 12 meters away at an angle of 160 degrees. This helps people to freely move around.

Document Falsification: A Challenge for FoxID

Imagine a system that can instantly verify the authenticity of a document from anywhere in the world. It exists and it’s called FoxID. This software helps address fraud, crime, and terrorism.

This digital tool is very simple to use. First the document is scanned (National ID document, passport, driver's license, etc.), and then the system sends it to a database where machine learning and artificial intelligence come into play. If there is anything suspicious, the second phase of the process is launched where the system asks simple questions about the official documents and the known counterfeits. These can then be checked simply and quickly by the FoxID user. If the authenticity is unclear, it is passed on to an expert certified in document falsification to prove the veracity of the document in a third phase that takes no more than four minutes.

The Companion Device for Epileptic Seizures, Designed by MJN Neuroserveis

MJN Neuroserveis was conceived by ​​a father whose daughter has had epilepsy for more than fourteen years. David, one of the company's founders, always held his daughter’s hand to prevent her from falling and getting hurt in the event of a seizure. His personal experience enabled him to work on devising a wearable device that can warn of an impending seizure, and therefore improve the safety and quality of life of the people affected and those around them.

Over time, the device has gained many more applications. In epilepsy, for example, the medical monitoring of patients can be improved since the person's brain activity is recorded at all times, which until now has only been possible in a hospital. The MJN Neuroserveis team is also incorporating Big Data into the solution to better understand how epilepsy and other neurological diseases will evolve in the future.

It has obtained EU certification as a medical device and has also completed a clinical trial to validate its technology. Each passing day is a step closer to achieving the goal that inspired this project: to eliminate uncertainty in when an epileptic seizure may occur, for the person affected and for their family.

VEnvirotech was created as a result of a research project by Patricia Aymà, a biotechnologist who is passionate about bacteria and the environment. Her main passion is treatment plants, and she defines them as "places where extraordinary things happen." From among the infinite possibilities of bacteria, Patricia saw its great potential in helping the environment, and specifically, in solving the problem of ocean plastic.

In her thesis, Patricia researched bacteria that can eat organic waste and transform it into a biodegradable bioplastic that is safe for the human body. All that was missing was a good business model to bring the technology from the laboratory to society. After much research and preparation by the company VEnvirotech, an environmentally safe bioplastic made with organic waste has been launched.

Alén Space. Takes on Fire from the Sky

The company Alén Space is ​​the result of a team that put all their effort into building the very first artificial satellite in Galicia, with the support of the University of Vigo. This start-up offers solutions based on aerospace technology which democratizes access to information about how to design, test and place nano satellites in orbit.

Alén Space have presented Lume-1 to the everis Awards, a nano satellite dedicated to fire- fighting, saving lives, and preventing deforestation. It was developed within the European FireRS project.  This nano satellite monitors mountains thanks to information received from infrared sensors located on the ground. The use of satellites provides support in the fight against fires that destroy lives as well as great masses of vegetation every year.

Behind Somax System is the work of three engineers with more than ten years of research experience in the field of ultrasonic technology. They have presented Echophone to the everis Awards, an extremely autonomous and lightweight wireless device that provides full-screen HD images and enables all kinds of clinical analysis.

Since the beginning of this adventure, the team took on the challenge of minimizing a conventional scanner to a pocket-sized device, supported by portable technologies. This versatility and compact size allows any health professional (primary care doctors, podiatrists, midwives, etc.) to use this device, offering technology which required specialized personnel until now.

The benefits of this ultrasound are undeniable, if health professionals use the Echophone as they do a stethoscope, diagnoses will be faster and help save lives. 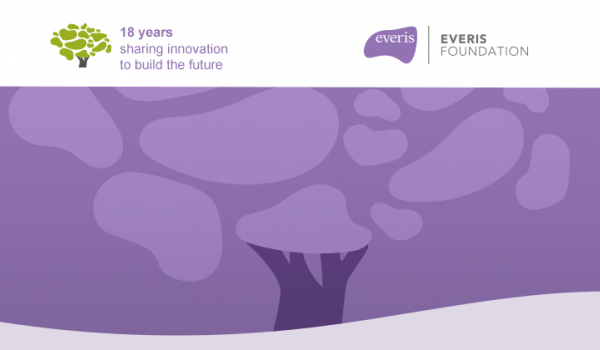